Iconic "tank man" photo NOT captured with a Sony Mavica

Iconic "tank man" photo NOT captured with a Sony Mavica 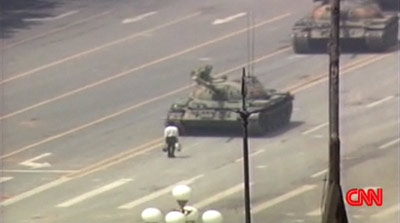 (Also, did you know that several photographers captured almost identical photos of this scene? Check the links below the article.)

Hi Jarle,
it is quite common among war photographers to 'produce' identical images of a certain happening. Since 2 or 3 decades most war correspondents are embedded and are together working on the same spot. In earlier wars they weren't embedded, like the late AP-photographer Eddie Adams, who received a World Press Photo award and a Pulitzer Price for his disputed photo of the Vietnam general executing a suspected Viet Cong member, and happened to become the winner. In fact his photo was a still picture, although the filmed report has been concealed. I do not think that there were (m)any combat photographers in the 1990's that were using digital cameras. I remember some CNN-photographers during the Kosovo-war using a Nikkormat as their Nikon F4 run out of batteries. Charging them wasn't possible as there was a permanent power failure.
It would be interesting to find/search for the first digital combat photographer.
Regards,
Nico

The article has been updated with Terril Jones' fascinating photo, with the tank man captured from eye level. The photo was taken with a Nikon F801 camera and a manual focus 80-200mm Nikkor lens.

And another one, with Magnum photographer Alex Majoli using an Olympus point and shoot camera to cover major conflicts: http://www.robgalbraith.com/bins/multi_ ... -6468-7844

Regarding the two most famous Vietnam photos (Eddie Adams' Saigon execution and Nick Ut's Napalm girl), both these scenes were also captured on film, but it's the still photos that are remembered.

"It would be interesting to find/search for the first digital combat photographer."

I think it's been posted before, but this article is interesting:
http://blogs.phillynews.com/inquirer/sc ... 0/12-week/

The one from October 13. It starts off talking about how Kodak DCS 100s and NC2000s were used in sports photography in the mid-1990s, and has a shot of a man called John Costello taken in Albania in 1999, where he was covering events with a DCS 620. He is surrounded by chargers and batteries and other parephenalia. The photo of him looks to have been taken with a digital camera as well, so perhaps he had a pair of DCS 620s with him, or there was another digital photojournalist travelling with him. I'm getting a weird feeling of deja vu.

I wonder what happened to the photo he is working on? It's reminiscent of the 1999 World Press Photo winner, also of a man with bandaged head wounds, also taken in Albania:
http://www.archive.worldpressphoto.org/ ... /year/1999

Perhaps, as you say, the photographers were travelling in a pack, and stumbled on some chaps who had been shot in the head, and John Costello's chap was less newsworthy than the chap that the World Press Photo people picked, so he didn't win the award.

I surmise that the DCS 400s were far too fragile for photographers to rely on in a combat zone, and the slightly earlier DCS 520s don't seem to have sold as well as the later Nikon F5-based Kodaks. The impression I get is that the transition from film to digital was very swift and very total, and so there wasn't an early pioneering digital war photographer because they all converted more or less simultaneously.

Regarding Mr Tank, the CNN article says that he was carrying flowers, but it's not obvious - I've always assumed he was on his way home after going to the supermarket with his shopping, but for all I know he had his sleeping bag and whatever he took with him to the square. Balls of steels anyway.

Was Terril Jones deliberately photographing the fleeing citizens, or was he trying to capture the tanks, and he just didn't have a long enough lens to fill the frame with them, and no time to change lenses, and Mr Tank was caught as an incidental detail. Question mark? I should break that sentence up.

I'm also reminded of this article, "Fake Photos can Alter Real Memories", which presents a doctored version of the famous shot:
http://www.msnbc.msn.com/id/21978560/ns ... e-science/

"To test what effect doctored photos might have, researchers from the University of California at Irvine and the University of Padua in Italy showed 299 people aged 19 to 84 either an actual photo or an altered photo of two historical events: the 1989 Tiananmen Square protest in Beijing and the 2003 anti-war protest in Rome.

The original Tiananmen Square image was altered to show a crowd watching at the sidelines as a lone man stands in front of a row of tanks. The Rome anti-war protest photograph was altered to show riot police and a menacing, masked protester among the crowd of demonstrators.

When answering questions about the events, the participants had differing recollections of what happened. Those who viewed the altered images of the Rome protest recalled the demonstration as violent and negative and recollected more physical confrontation and property damage than actually occurred."

Doesn't follow up on the Tiananmen Square image though. I have to say that after looking at the doctored version a note of discord went off in my head, but I didn't register the alterations until the article pointed them out.
Top

Interesting article, thanks for the update on history. It's always surprising how what really happened doesn't coincide with the popular memory. (Although the stills from the BVU 330 could easily be mistaken for something from an MVC-5000).

Regards the use of digital cameras in war zones, I heard rumors the MVC-5000 was also used in the Gulf War but have never seen photos from it. The underwater Kodak DCS 425 you also list could be a contender for the earliest, but if it was ever used it was by servicemen rather than photographers.

Today a D300s with a few lenses and a handful of memory cards and charged batteries could last weeks in the field unless the photographer insists on capturing every possible scene. But in the dark days of NIMH batteries and PCMCIA hard drives the old cameras wouldn't last long before dying. I remember early photographers with the NC-2000 would get frustrated that that battery would die halfway through a sporting event and since it was internal the only choice was to plug in somewhere and fall back on film or use another camera.
Top

I'm replying to this old post because it was just recently brought to my attention.

I'm the Philadelphia Inquirer photographer mentioned and I was using digital and transmit via SatPhone. The photo of of me in Albania was shot on a tripod by me for a story somebody wanted on the "technology used by news gathering print journalist" for the refugee crisis in Albania and the war in Kosovo.

There was a comment in the post about batteries. Batteries and power in general is always a problem but we'd use a combination of both. I'd always have a inverter hard wired to a car battery for charging AA's, the Nikon batteries as well as a couple Quantum batteries while I was in a car moving about the country. I'd have a driver who would always charge up a couple extra car batteries that we could haul into hotel room and use as needed.

I don't recall if I saw anybody else using Digital, image quality particularly noise and magenta flare in spectral highlights was a huge problem. So people who could get in and out of the county with film did just that. They also had much more time to actually shoot when they cut out all the logistics of post production and transmitting.

The need was certainly there for digital because The Philadelphia Inquirer wanted stories and photos daily. In Sarajevo years earlier they had the same demands. Film created problems including physically getting to AP or the European Press Agency, wait in line to process film. Using what might be exhausted chemicals. It was just not working. Alternatively doing it myself in a hotel room (very loose use of the word hotel) Knocking chunks of ice out of the bathtub, melting it over a small camp stove then using the water to mix up a daily batch of UniColorC41 chemistry, melting toilet water to "wash" the film, trying to stabilize the temperatures from start to finish - it was a nightmare.

So when I went to Albania and Kosovo in '99 we went digital. I was handed an Nikon digital camera one day before my flight to Europe en route to Albania/Kosovo and told it was like "any other camera." The first photos I shot was a soldier beating a robbery suspect. The soldier was holding on to the barrel of a Kalashnikov and beating the suspect with the rifle butt. The shutter lag time was considerable different than "any other camera."

As far as the massacre victim shown on the Mac G3 computer screen he may have been the same guy as the WorldPress winner (I don't know) The images were taken months or years apart. The bandaged man on my screen is Selami Elshani. (Washington Post story my photos ran 18 April 1999 with the headline "If I Could Not Talk, Nobody Would Know" By Peter Finn) I found Elshani and he was airlifted out about a day and a half later by the War Crimes Tribunal of the Hague because he was the first Kosovo massacre victim to survive and be found and he was in danger of assassination.

Sorry about the late post - this stuff is all ancient history now. Those digital images soooooo small, (made even smaller when I had to compress for storage) photo files with bands of noise. Hard to believe it was so much work to get it shot - then into a Mac, Photoshoped, dealing with a SatPhone with serial ports (writing the modem scripts), I think it was 26.6 modem (?) transmitting into BBS Spider Island. Getting it pulled into the office and then confirming a good transmission or RETRANSMIT. Long, Long days that were about 5% shooting and 95%logistics/production.

Thanks to Jarle Aslant for the assist.
Top
Post Reply
6 posts • Page 1 of 1

Return to “Other stuff”